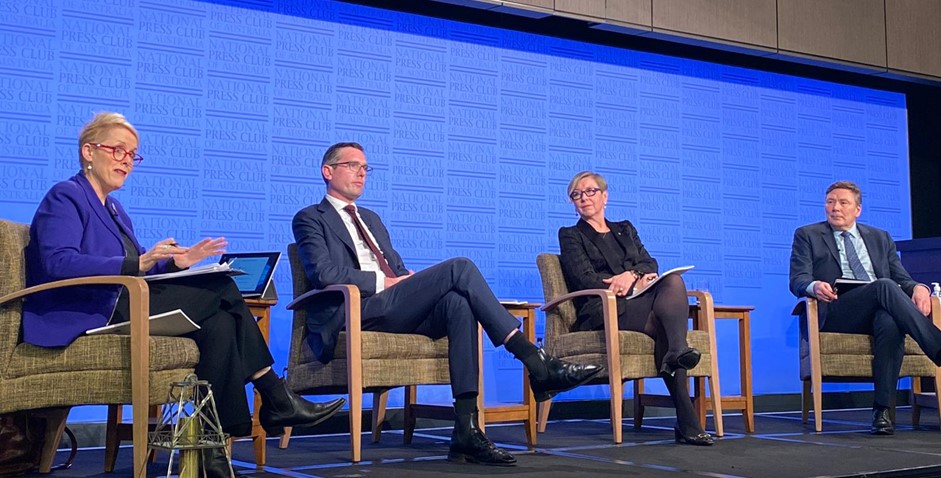 This Press Club Address comes after the announcement of the NSW Review of Federal Financial Relations, undertaken earlier this year and updated due to COVID-19. Mr Thodey chaired this inquiry and Ms Halton also participated in the formulation of the Review’s findings.

With the economic landscape drastically changed for both State and Federal Governments, the Prime Minister has seized the opportunity to make reforms to the Federation, with improving the State-Federal relationship one of his key goals coming out of COVID-19.

As a part of the economic reforms associated with the broader Federation changes, the findings of this NSW Review may have a broader impact on all states and their financial relationship with the Federal Government.

The Nexus team has analysed the discussion from today’s Press Club Address and present our key insights on an exciting new vision of Australian governance.

According to the findings of a year-long review conducted by Mr Thodey and commissioned by Mr Perrottet, NSW could struggle to fund essential services in the current economic climate unless it embraces urgent and ambitious tax reform, which suggests among other reforms, the abolition of stamp duty due to its status as an ‘inefficient tax’.

The review suggests replacing stamp duty with a land tax, with homeowners given the option to opt-in to the new system. During the address today, Mr Thodey emphasized that the transition from a stamp duty to a land tax should take place over a lengthy period of time to ensure the phase-in to the new system doesn’t cause a significant revenue hit or negative economic impact.

The overall need for structural tax reform was underlined throughout the panel discussion, with Mr Perrottet saying “As a government, our priority is clear: we want taxes that are lower, fairer, smarter and fit for purpose in the 21st century.”

The NSW Review of Federal Financial Relations also recommends that Australian State Governments, in consultation with the Commonwealth Government, consider options for lifting the GST rate and expanding its base over the medium to longer-term.

The review states that the purpose of overhauling the GST would see a move away from “harmful taxes including inefficient state taxes”. It also emphasized that extra GST revenue should go to lower-income households to ensure equity during potential reforms.

When pressed about potential Commonwealth reluctance to increasing the GST, Mr Perrottet stated that while GST reform would be difficult, State and Territory Treasurers had an obligation to pursue reform in light of the challenges presented by Covid-19, and such reform is made easier by sweeping Federation changes, such as the creation of a permanent National Cabinet, recently implemented by the Morrison Government.

The review also calls for a “strategic national approach to payroll tax reform”. This is a significant reform in considering the NSW government estimates it will raise $9.8 billion in revenue from payroll tax in 2019-20, out of a total $32.5 billion in state taxes collected.

In addition to the reforms above, the review looks into the viability of a congestion charge, and also suggests the inclusion of user-pays road charging for electric vehicles – with the Commonwealth facing a projected shortfall in the $11.3 billion fuel excise. Mr Thodey emphasized the importance of road charge reforms, presenting forecasts that project 60 per cent of all new cars sold to be electric powered by 2046.

Finally, the report underlines the need for action on suggested reforms due to state and territory governments likely facing an era of higher debt, “challenging their ability to sustainably deliver essential services and infrastructure”.

Look out for our weekly email this Saturday, where we will explore, in-depth, the possible implications of the Thodey taxation report for business and industry.